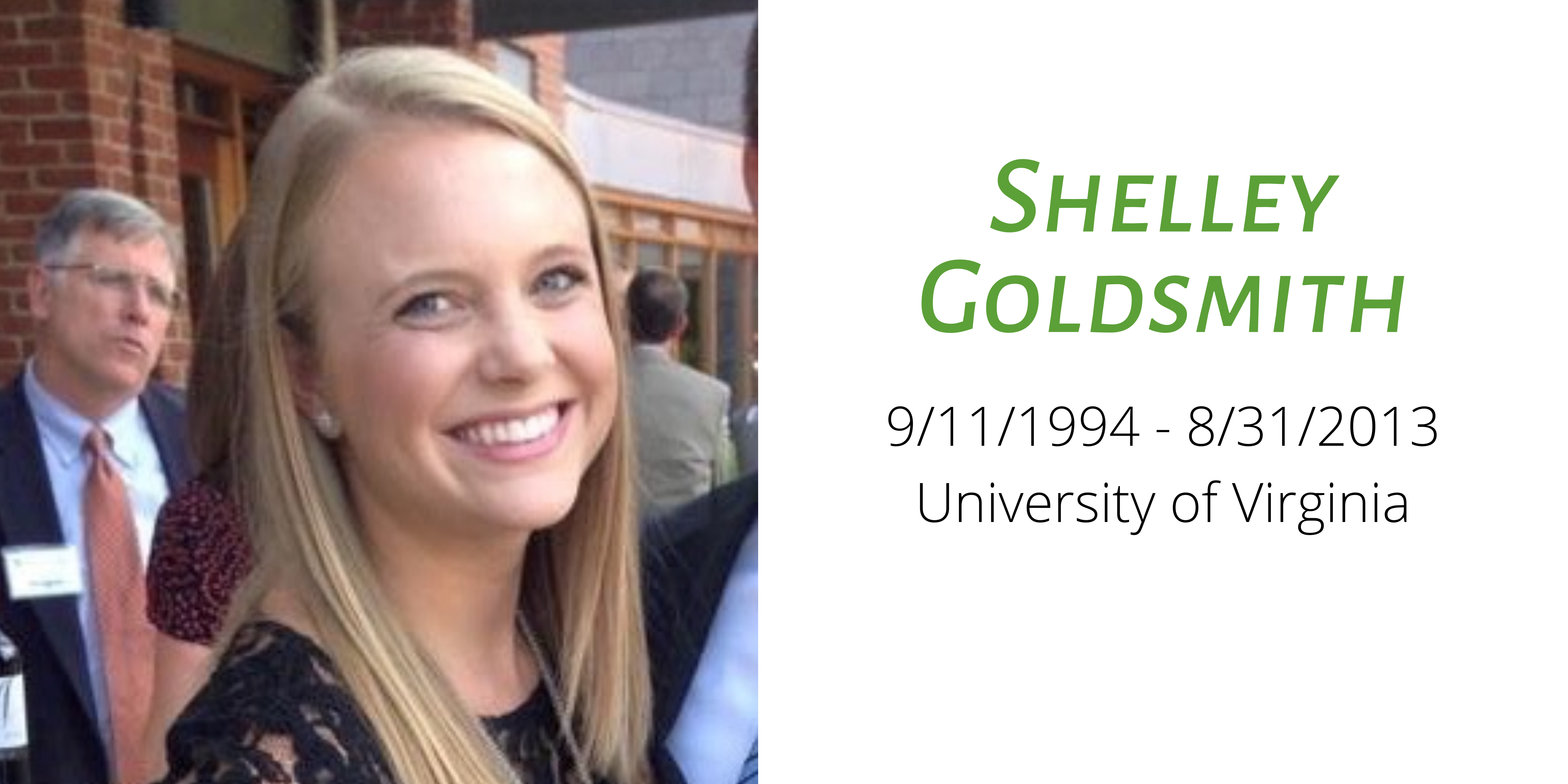 On August 31, 2013, 20-year-old University of Virginia (UVA) student Shelley Goldsmith collapsed at a club in  Washington DC after a night of dancing at an electronic dance music (EDM) concert. Just before she lost consciousness, she urged her boyfriend to call 911. Shelley had traveled to DC with sisters of many different sororities and members of a UVA fraternity that chartered a bus for the 2-hour drive from Charlottesville, VA. During the bus ride, MDMA (also known as Molly or ecstasy) was handed out, and Shelley took the drug. She then danced for several hours at the overcrowded club, with no easily-accessible water to prevent dehydration. Shelley became overheated, suffered from hyperthermia (heat stroke), and went into cardiac arrest, causing her collapse. Her parents, Dede and Rob, arrived at the hospital to find Shelley comatose, and she never regained consciousness. Shelley’s cause of death was cardiac arrest with MDMA intoxication — she had no other drugs or alcohol in her system when she died.

Shelley grew up in Abingdon, VA, as Dede and Rob's only daughter and cherished younger half-sister to Nico. She adored being an aunt to Nico's three sons. Shelley had wanted to attend UVA since she was in 4th grade, and she worked hard to achieve that goal. She was a second year honors student at UVA as a Jefferson Scholar, a member of the Alpha Phi Sorority, and an Abingdon High School Honors Graduate, class of 2012. Growing up, Shelley would say she either wanted to be Secretary of State or a wedding planner, which perfectly captured her personality — she was a serious student with a whimsical, playful side…and she believed everything was better with cupcakes! Spending time with her friends and family was most important to her. Shelley was an earnest and faithful friend. Her love of life was contagious, whether it was leading a student council meeting or Venture Crew program, being involved in the activities of Girl Scouts or her church youth group. She volunteered at the food bank, worked for Democratic candidates, decorated cupcakes with her friends, all with confidence, enthusiasm, organization and a light heart.

“Rob and I have outlawed the words ‘would of, should of, could of’ when we talk about Shelley,” Dede says. “There are things we wish we had done differently, but so many more reasons to celebrate all that we did together as a family while she was alive. That is a blessing. She was not supposed to die. Her death could have been prevented. She could have chosen not to use MDMA…but she did, like so many other young people. We owe it to the significant segment of the student population that chooses to experiment with recreational drugs to make sure they do so without the risk of medical emergency or death using whatever method(s) works best. Just as we do for alcohol use among underage students.”

Dede continues, “Shelley was delightful and had a certain sparkle — she was a very special person. I mourn that our journey together was so short, but I’m grateful for the 20 years I was able to know her love as my child.”