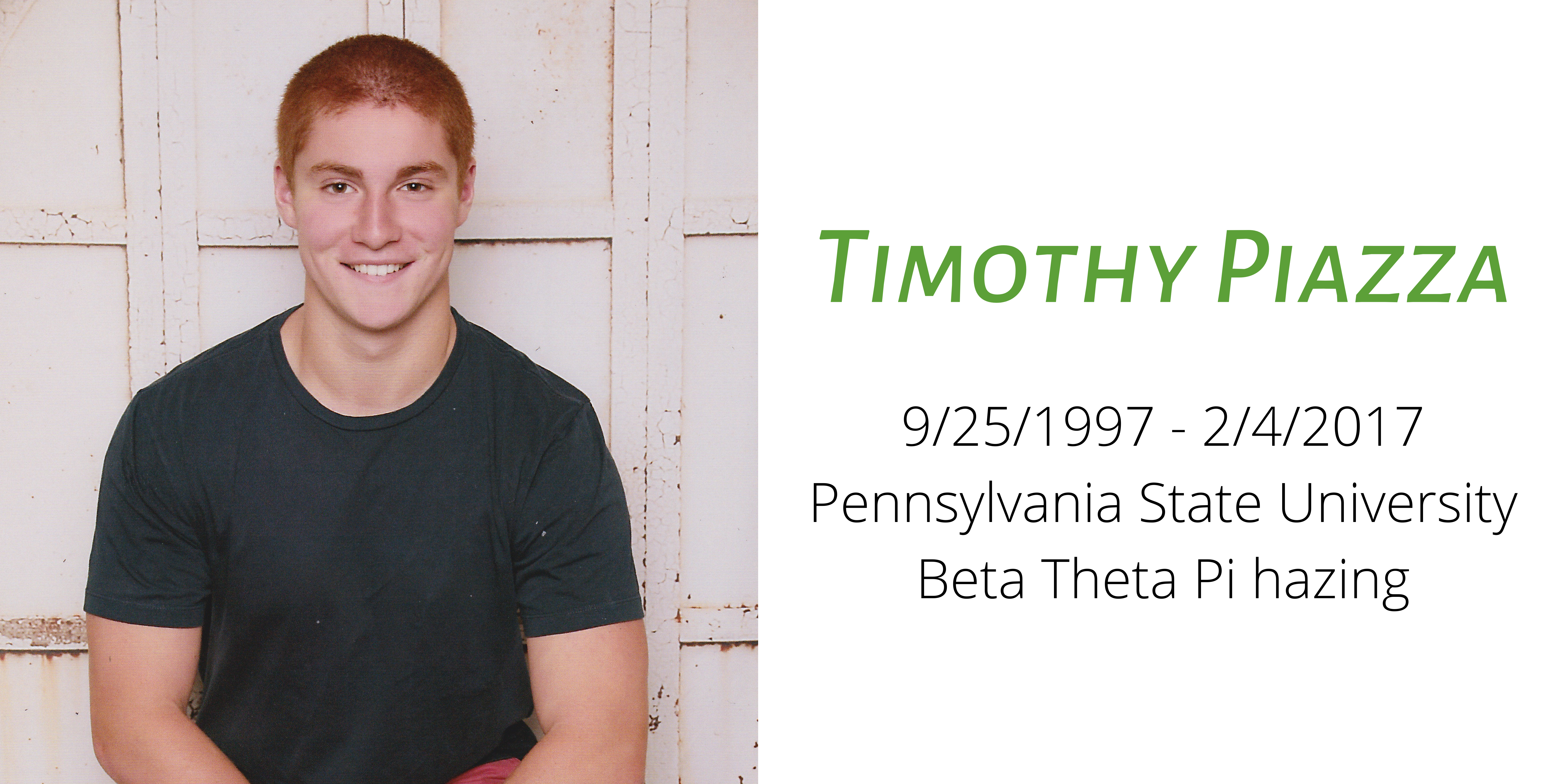 Tim Piazza was a 19-year-old sophomore at Penn State University when he died on February 4, 2017, after being severely hazed during a bid night event for Beta Theta Pi fraternity. Tim grew up in Readington Township, NJ, as the beloved youngest child of Evelyn and Jim Piazza, and brother to Mike.

Tim graduated from Hunterdon Central Regional High School, where he played football and did spring track. He participated in the school’s Teen Prevention Education Program, educating 8th and 9th graders on peer pressure, bullying, and other issues facing students. At Penn State, Tim was majoring in engineering, and his goal was to help create prosthetics for children after graduation.

Tim was hazed on the first night of pledging, and forced to consume a large amount of alcohol in a short time. Heavily intoxicated, Tim fell down the stairs in the fraternity house. Fraternity members carried him back up and placed him on a couch. Tim attempted to get up multiple times throughout the night, and fell each time. No one called for help for more than 12 hours after Tim’s initial fall, too late to prevent Tim from succumbing to his injuries.

“Hazing is so insidious — you don’t even realize until you’re in it (and maybe not even then), and then you don’t feel like you can walk away because you’re under duress,” Evelyn says. “The fact that it happened to Tim…it could really happen to anyone. The hazing was by people who supposedly liked him — they liked Tim enough to invite him to join their organization, but they didn’t care enough about him to save his life. That really hurts, because he was such an incredible person, and it was so cruel to not call for help when he obviously needed it…and to put him in that position in the first place. If they had never done this and Tim was able to pledge and be part of that organization, they would have loved him — he would have been such an asset to them and to the world. Instead, so many people’s lives were affected by losing him. It hurts just as much 4.5 years later as it did in the beginning.”

Tim’s family runs a foundation in his memory that provides scholarships to student-athletes at his high school, as well as prosthetics for children who could not otherwise afford them.