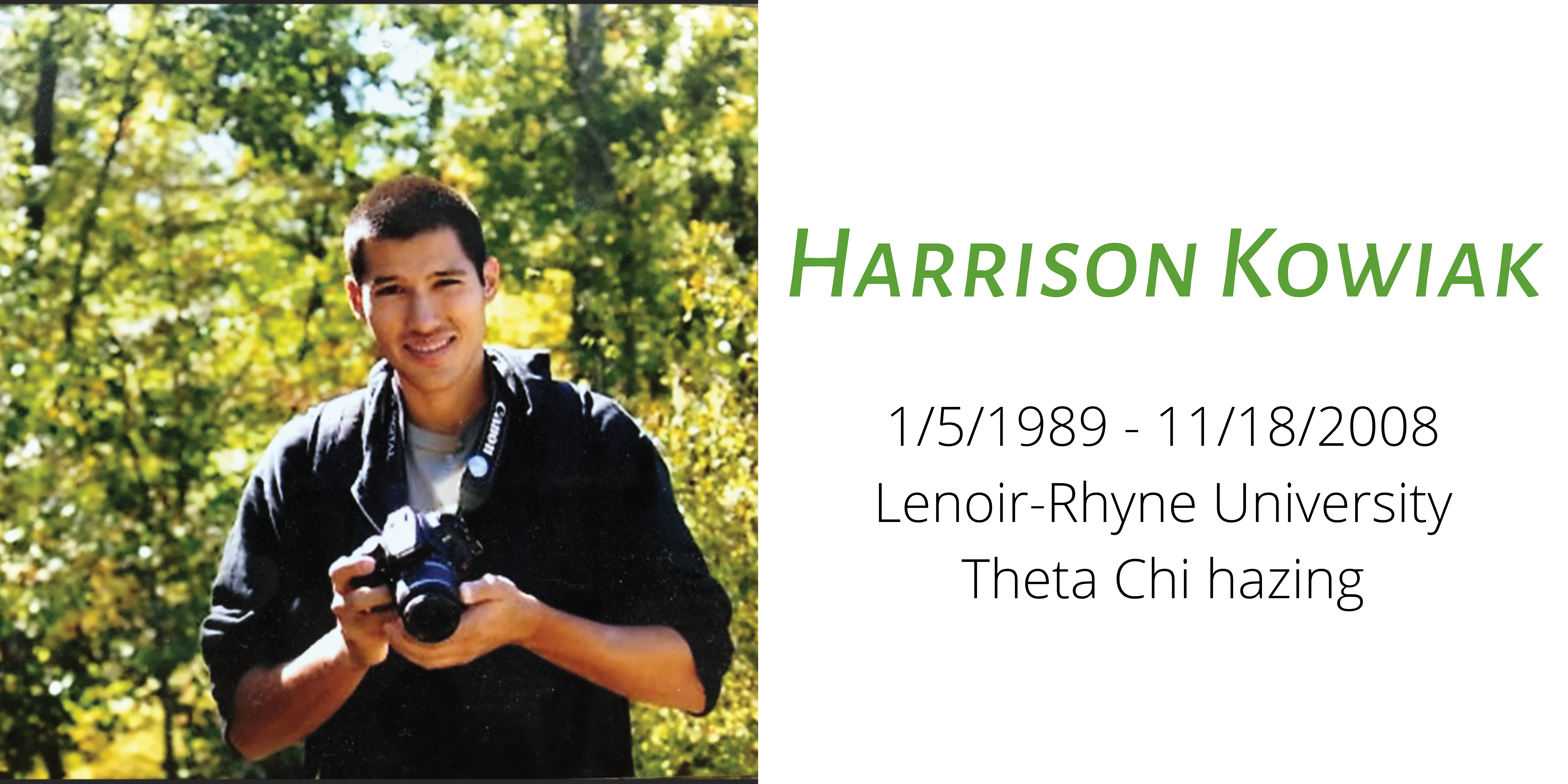 Harrison Kowiak was a 19-year-old sophomore at Lenoir-Rhyne University when he died on November 18, 2008 from a head injury caused by the hazing he endured from Theta Chi fraternity members. Harrison grew up in New Jersey, California, and Florida, and was the beloved oldest child of Lianne and Brian Kowiak, as well as the idolized big brother of Emma.

Harrison attended Lenoir-Rhyne on an academic and golf scholarship, and was encouraged to join Theta Chi by seniors on the golf team who were also Theta Chi members. Harrison wasn’t concerned about the pledging process because his golf teammates told him that they would look out for him. One night, Harrison was taken to a field 20 miles from campus and told to walk across the field in the darkness to retrieve the “sacred rock.” Members of Theta Chi (some of whom were football players for the University) formed a gauntlet in the dark and repeatedly tackled Harrison and another pledge by surprise. Harrison suffered a head injury during a tackle, and instead of calling for help, the fraternity members eventually drove Harrison to a hospital near the campus. Harrison was airlifted to a trauma center, and died the next day from a severe brain hemorrhage.

Lianne says, “When I speak with students, I remind them to call 911 if it’s an emergency. Their swift action could save a life. Instead, the brothers panicked and precious minutes were wasted…minutes that potentially could have made a difference. Harrison would be 32 years old today...perhaps married with children, working in a golf-related business, traveling, and enjoying life. All of this was ripped away from him at the age of 19 to senseless hazing. There is no place for hazing -- no one should be subjected to emotional and/or physical harm to join an organization.”

Lianne serves on the board of HazingPrevention.Org (HPO), and created the Harrison Kowiak Scholarship in her son’s memory. The scholarship has allowed over 30 participants to attend the annual HPO Hazing Prevention Institute. “We can’t bring Harrison back, yet we can move forward and try to prevent hazing deaths. I encourage parents and their children to have two-way conversations regularly. Tough love conversations may not be easy, but they can make an impact. It takes a village and we ALL must work together to prevent hazing.”