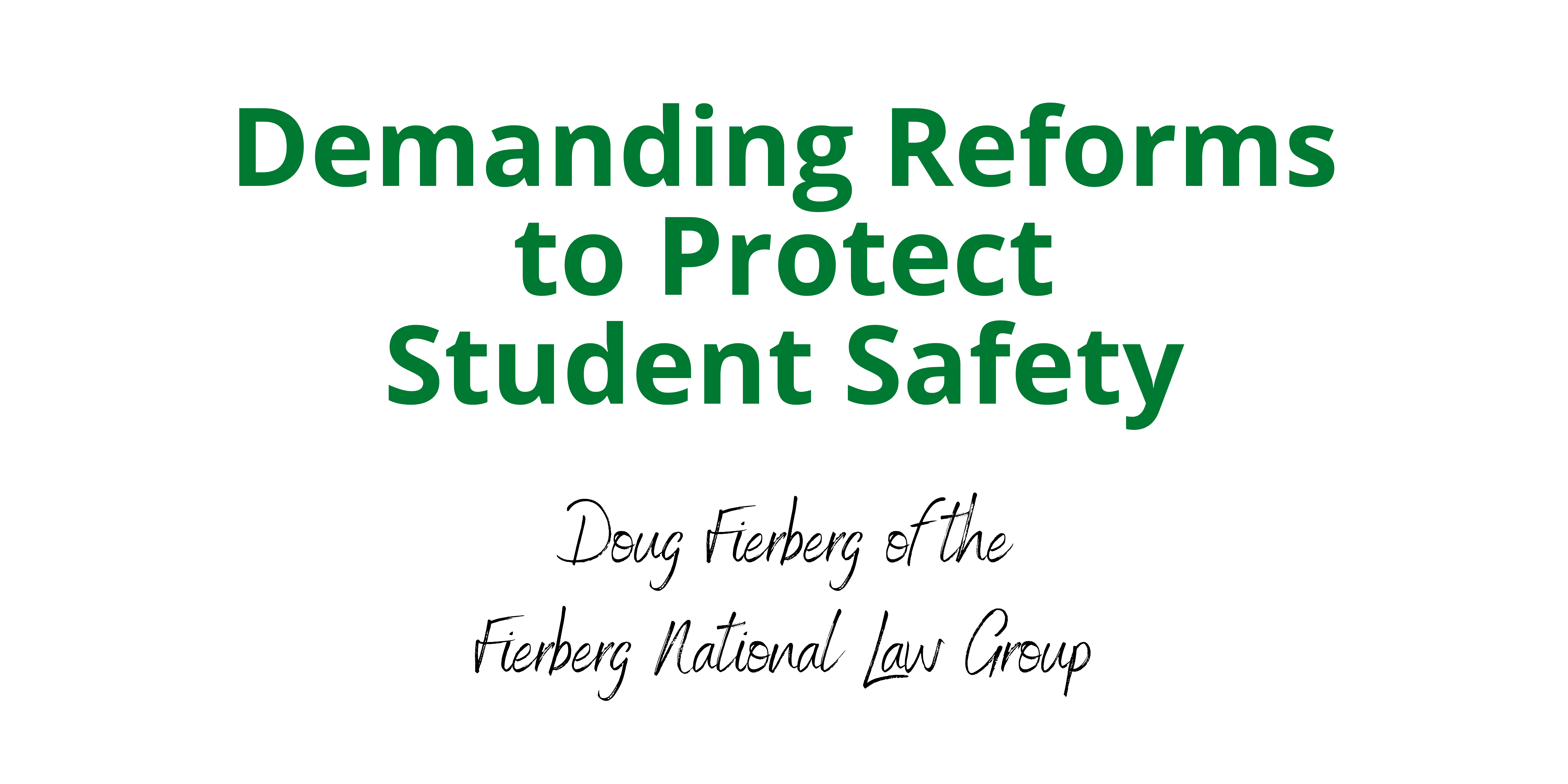 This article originally appeared in the Gordie Center's 2019 print publication.

When Gordie died, the Lanahans sought legal support from a firm that had familiarity with hazing cases. They found a champion for Gordie in Doug Fierberg of the Fierberg National Law Group. Doug’s firm had been handling hazing cases for at least 10 years when he took Gordie’s case. The Lanahans sued the University of Colorado, Chi Psi fraternity, and a number of fraternity officers involved with the activities that caused Gordie’s death. “The Bailey case was important,” Doug says. “Fifteen years ago, the majority of hazing cases seeking to hold national, local, and individuals responsible were not successful. The fact that the Lanahans were successful in so many ways changed how fraternities respond.” Doug recalls that Gordie died in a longstanding fraternity ritual, and at the time, the public misperception was that he consumed too much alcohol on his own and died. The fraternity also held the age-old attitude that no one but Gordie was responsible for his death.

I’ll never forget Leslie’s response to the settlement offers from defendants … she said she felt like she was at a flea market negotiation over the death of her son.
Doug Fierberg, lawyer for Gordie's family

Working against the Lanahans was a Colorado law that capped monetary awards at $320,000 combined from all defendants. CU and Chi Psi would shoulder the bulk of the monetary burden (which would be paid by their insurance companies), leaving the fraternity officers with only small monetary penalties, which would be covered by their parents’ homeowner insurance policies. When the individual defendants in Gordie’s case entered mediation with Doug and the Lanahans, they believed that, under Colorado law, they wouldn’t be responsible for more than a few thousand dollars each — Doug says, “I’ll never forget Leslie’s response to the settlement offers from defendants … she said she felt like she was at a flea market negotiation over the death of her son. The wrongdoers were offering pennies for having caused the Lanahans immeasurable pain and damages.” Colorado law at the time was also unfavorable to parents like Leslie and Michael when their loss was non-economic (i.e., pain and suffering).

For the Lanahans, money wasn’t their objective. “It was never about the money for us — money wouldn’t bring Gordie back. We wanted to make it as painful for the defendants as possible, so that their business model becomes more expensive. I’m not anti-Greek … I’m against idiots who continue to lead corporations and don’t show any leadership or concern about how dangerous their business is. Financial penalties change the business model and stop the deaths from hazing,” says Michael. Doug and his firm discovered a novel way around the Colorado award cap — another Colorado law where wrongful conduct and harm caused could be considered reckless manslaughter. A finding of reckless manslaughter would not be subject to any cap, and the potential for an uncapped penalty was enough to push the defendants toward a more meaningful settlement with the Lanahans. “We pushed hard on the national fraternity because the Lanahans wanted to make changes. Gordie’s lawsuit was not just about money — a number of institutional reforms were imposed on the fraternity as a condition of their settlement. Gordie’s case was one of the first hazing lawsuits to demand and successfully compel non-monetary reforms to increase student safety as part of the settlement. The fraternity was compelled to make changes as a result of the case.” Part of the settlement forced Chi Psi to take responsibility for Gordie’s death, and to educate their members about Gordie and the dangers of alcohol overdose moving forward.

Gordie’s case was one of the first hazing lawsuits to demand and successfully compel non-monetary reforms to increase student safety as part of the settlement. The fraternity was compelled to make changes as a result of the case.

Because of Gordie’s death, the Chi Psi national fraternity shut down the local CU chapter of Chi Psi, allowing re-colonization six years after Gordie’s death. The national fraternity recently provided this statement about Gordie’s death and its impact on Chi Psi: “Gordie’s death was a shock to the soul of Chi Psi. The immediate response involved taking a program to each of our Alphas (chapters) with information about Gordie’s death, and the danger of including any form of hazing and alcohol in the new member program. This program ultimately grew into our Education Responsibility and Action program, which is facilitated annually at each of our Alphas. While core values remain the same, Chi Psi’s operations are very different now than they were 15 years ago. Chi Psi is more aware of the warning signs when the culture within an Alpha is trending in a negative way, and we are less reluctant to close a chapter if that is the best way to address cultural issues. The Gordie Bailey story is included in our new member book, ‘The Chi Psi Story,’ so every new member hears Gordie’s story.”

As for the Greek system at CU, Gordie’s death prompted the creation of a new agreement between the University and Greek chapters to provide increased safety through educational requirements and additional oversight. The sororities signed the agreement and continue to operate as recognized student organizations at CU, but the fraternities balked. Less than a year after Gordie’s death, the fraternities chose to remove themselves from CU’s oversight and discipline, and now operate as a private corporate entity — the “IFC on the Hill.” This corporation is owned entirely by the undergraduate men of the fraternities and operates with a board of directors comprised of the undergraduate presidents of each of the 22 member fraternities. It is the only IFC organization in the country that operates without a connection to the university where the fraternity members attend. The Chi Psi chapter in Boulder re-colonized in 2010, in the same house where Gordie died, and is part of the IFC on the Hill.

It would be impossible sit down with the Lanahans, hear about their tremendous loss, and then give up the fight.

Doug Fierberg, the attorney for Gordie’s lawsuit, is effusive when discussing how the Lanahans and Gordie’s case changed the legal landscape of hazing cases by forcing a settlement that included monetary and non-monetary penalties aimed at education and culture shift. “The Lanahans were in incalculable grief, and were able to help so many families. Hazing is still happening, and it’s hard to deem success in that you don’t know whose life has been saved … no deaths is not the only measure of success. Many lives have been saved because of the Lanahan’s efforts to raise awareness,” Doug says. For Doug and his firm, working on behalf of hazing victims and families has been at the heart of their efforts for 25 years. “Burnout simply isn’t plausible. It would be impossible sit down with the Lanahans, hear about their tremendous loss, and then give up the fight currently. It’s the right fight, and not a bit of work that my firm is doing is disconnected from Gordie. Lawsuits, strategies, demands, and negotiations are still being carried on in honor of Gordie Bailey and his family."