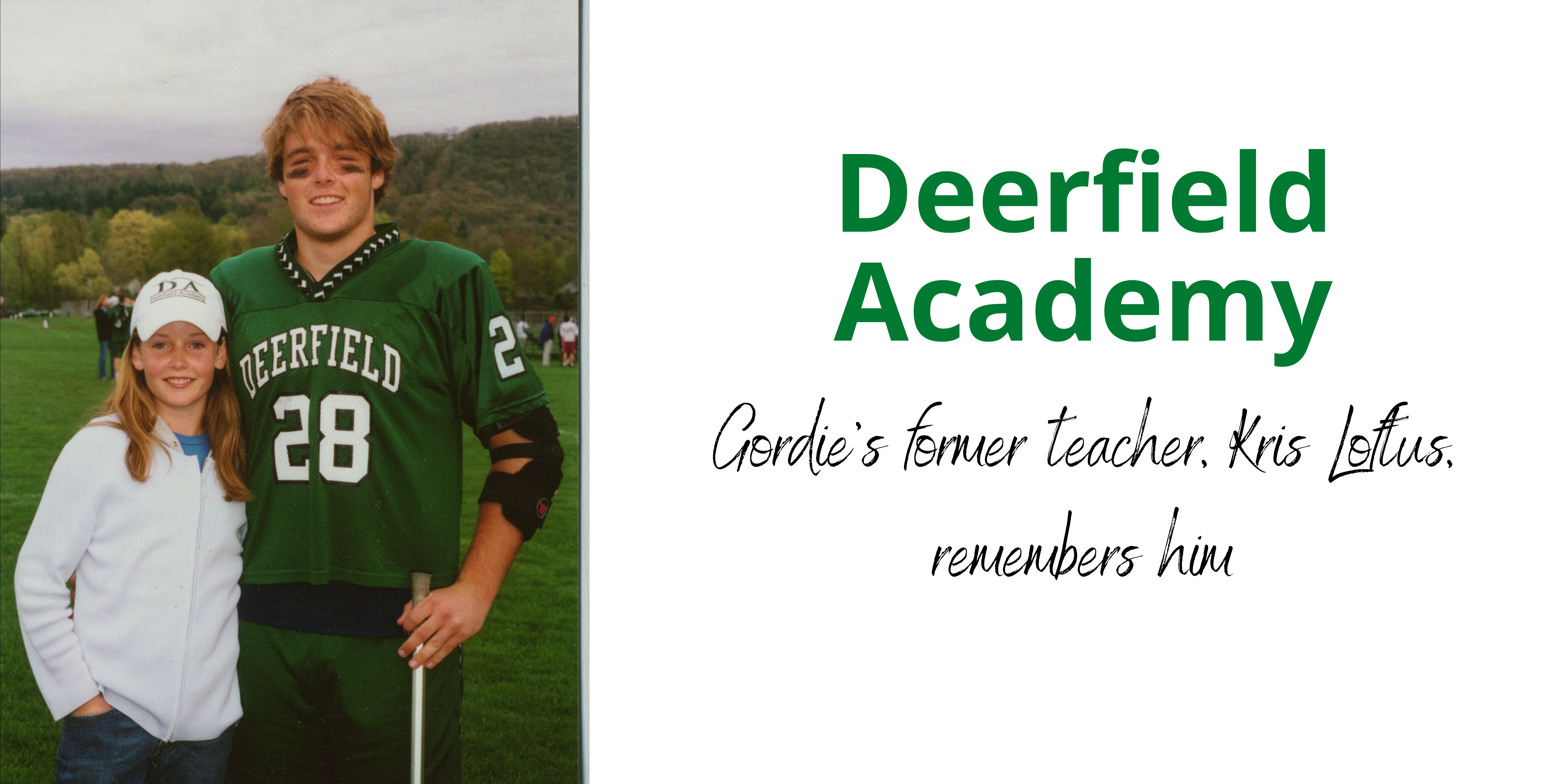 This article originally appeared in the Gordie Center's 2019 print publication.

Gordie had spent most of his life in Dallas, Texas, and was looking to branch out during high school by attending a boarding school. He had completed his freshman year at St. Mark’s School of Dallas and was ready to try an experience farther from home. He considered his mom’s alma mater (The Taft School in Connecticut), and had toured a few other boarding schools when Deerfield Academy captured his attention.

Deerfield is a coeducational independent boarding and day school located in Deerfield, Massachusetts, with approximately 630 students from all over the country and the world. The campus is beautiful, the sports teams are competitive, and the arts program is vibrant. Gordie was drawn to Deerfield for those reasons, and elected to attend his sophomore through senior years at the Academy.

Kris Loftus was a teacher at Deerfield when Gordie arrived on campus. She joined the Deerfield staff in 1994, and was teaching a class called Health Issues and supervising Deerfield’s Peer Counseling program. “I had Gordie in my Health Issues class, and I feel like I knew him well. Truly, everything about Gordie was big — physically and his personality. He had a great sense of humor and was genuinely kind to all. I fondly remember his big cowboy hat, but more memorable was his warm personality. He was larger than life in his time at Deerfield — involved in everything! Sports, clubs, and acting … it was very rare to have a varsity football and lacrosse player on the stage in the winter performances. I remember him being involved in almost everything — he was definitely one to get activities going on the weekends or be a fan at games when he didn’t have one.”

Gordie thoroughly enjoyed his time at Deerfield — he immersed himself in every aspect of student life and was a proud Deerfield graduate in the spring of 2004. Three months later, he was gone.

"I think Gordie was quite legitimately the most popular person in our class in high school — he was a great athlete, attractive, he was physically a big guy, played football. No one ever said a bad thing about him. People who have all these things going for them can still be the subject of hazing. Nobody deserves it, but it doesn’t discriminate — it can happen to people who you might not think it can happen to. Hazing doesn’t just happen to people who are weaker amongst us — Gordie was the strongest and most well-liked, and he was still put in a situation where because of some weird systematic pressure, things were being done to him that were unfair, and it was hard for him to fight back against.

I remember hearing the news the next morning — it was horrible and devastating. Everybody from the immediate area congregated at a house in Greenwich — Deerfield classmates from New Haven, Massachusetts, New York … we just dropped everything and wanted to be together, which made us feel closer to him. At that time in our lives, he was such a symbol of the unity of our class — he brought everyone together, and he continued to do that after he left us.”

“There are very few words to describe the impact — it was unbelievable and shocking. He had just left campus, and his presence was now missed in a way that was indescribable,” Kris says when remembering how the Deerfield community experienced the news of Gordie’s death. “Personally, I felt a tremendous amount of guilt. I was the one responsible, as his health teacher, for preventing this type of tragedy. It was very difficult to think that our time together in Health Issues two years before had not adequately educated Gordie on the possibility of alcohol overdose, but it was a huge wake-up call for me and for Deerfield that we needed to try to do more.”

After Gordie’s death, there was a greater emphasis on the risk of alcohol overdose added to the sophomore curriculum. The school also added a senior transition program that includes a showing of HAZE with a discussion after the viewing. Deerfield students are asked to rank their class sessions (on a scale of 0 for “waste of time” to 5 for “I learned a lot/very helpful”), and the class that includes the HAZE showing is the highest-ranked class every term, receiving almost all fives.

“When we first started to use HAZE in class, some students either knew Gordie or his younger sister (who went to Taft) and they had a hard time with it all — it really hit home. Fifteen years after Gordie’s passing, the film still truly hits hard with each Deerfield student — you can hear the gasps when they first see Gordie in his Deerfield football uniform, since students assume the film is just another health video. ‘Wait, he went to Deerfield?’ is whispered and the discussion afterward has a palpable seriousness with the realization that he was one of our own. The message of loss for a family, community, and school due to something that was so preventable is powerful.”

Deerfield honors Gordie by continuing to share his story every year, and recently made cards featuring him for a campus kindness campaign — Gordie had started a “Hug Club” while a student at Deerfield to spread kindness through hugs. “We also have a bench on campus on the hill going down to our lower athletics fields, facing the football field and the river. The plaque on the bench says ‘Gordie’s Overlook.’ Students who watch HAZE in sophomore class often nod their heads in realization of who the bench honors.”

Deerfield partnered with the Gordie Center shortly after Gordie’s death, running fundraisers and creating products for Deerfield students, like GORDIEcheck wallet cards with the signs of alcohol overdose. Kris even gave GORDIEcheck cards to friends of her son when they graduated from high school. “One of his friends pulls the card out of his wallet each time I see him — and he’s now a junior in college.” Kris’ Peer Counseling students helped her hand out GORDIEcheck cards at Deerfield events and the health classrooms at Deerfield display GORDIEposters with the signs of overdose and information on how to help a friend. Deerfield’s current Health Educator, Margaret Brown, echoes Kris’ feelings about continually educating Deerfield students about Gordie. “When we show HAZE, we talk about relationships and look for opportunities where folks surrounding Gordie could have made a difference,” Maragaret says. “Deerfield is connected to Gordie, and his story and life continue to impact our community.”

Kris continues, “The most important message about Gordie’s story is that it can happen to anyone. So many teens think they are invincible, they will be fine, it won’t happen to them or someone they know … but it can. Gordie’s message is more than ‘avoid alcohol overdose and hazing.’ It’s also a message of looking out for people — making good decisions in party environments, how to recognize the signs of alcohol overdose, and how to prevent the situations that lead to alcohol overdose.” As for the impact Gordie has had at Deerfield over the last 15 years? “We have not had another young alum die from an alcohol overdose. Students have shared their smart decisions to help a friend, so I feel confident that many of our students have taken Gordie’s message with them ... I imagine many lives have been saved by it.”